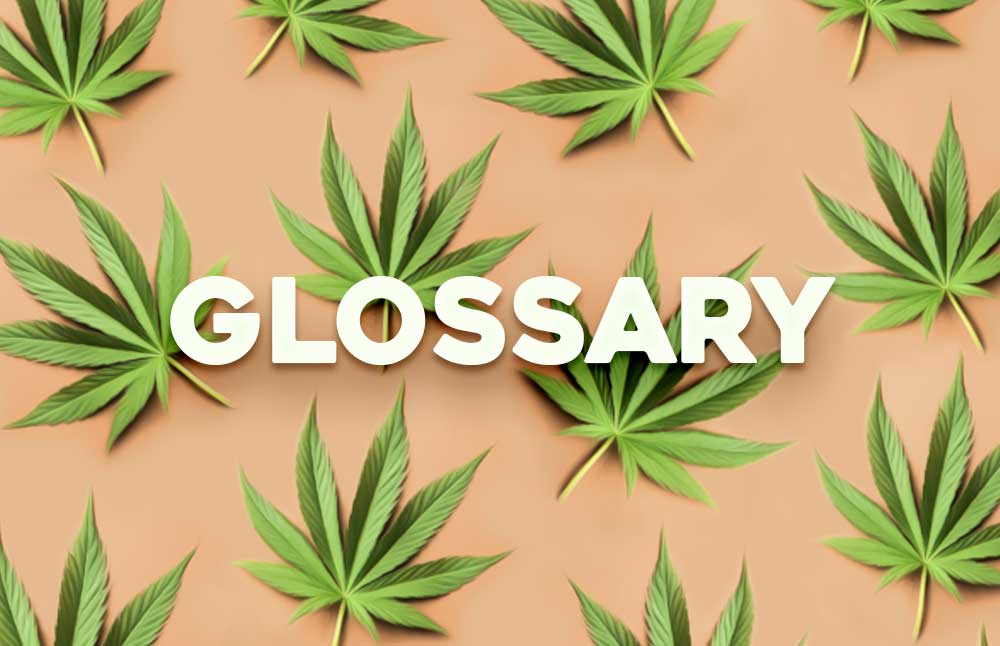 There are a million terms floating around out there. Sometimes it is hard to pin down the real differences between them. Do you even know if you are talking about fabric, plants, or drugs?

Don't worry. We've got you covered. We're here to help clear up the confusion between cannabis and marijuana.

Check out our ultimate dictionary of terms to make sure you know what you're talking about.

This glossary will provide you with all the starter terms you need to know.

It's in alphabetical order, so you can easily find the terms you need.

Bud is a synonym for the flower of the mature marijuana plant. This is the part of the plant that we consume.

Cannabinoids are the chemical compounds found in Cannabis plants.

The two most commonly known cannabinoids are tetrahydrocannabinol, also known as THC, and cannabidoil, or CBD.

We use the term Cannabis to discuss the plant as a biological entity. Cannabis is a genus of flowering plant that is native to central Asia and India.

There are three species of the Cannabis genus: Cannabis ruderalis, Cannabis sativa, and Cannabis indica.

Cannabis ruderalis has low THC concentrations and small size. It is not typically cultivated for profit. Cannabis indica and sativa, on the other hand, have many medicinal and recreational uses.

Cannabichromene is also known as CBC. It is a minor cannabinoid in plants of the Cannabis genus.

Scientists discovered CBC over 50 years ago. CBC does not have any psychoactive effects and does not produce a “high”.

However, CBC is one of six cannabinoids that are prominent in medical research. There is hope that CBC may have applications in curing cancer.

Cannabidoil is one cannabinoid found in plants of the Cannabis genus.

It is commonly abbreviated as CBD.

CBD has many medicial functions. It is a popular way to treat symptoms and conditions such as nausea, arthritis, seizures, anxiety, musculoneural pain, and other ailments.

CBD is also used to treat Dravet syndrome. It is sold under the brand name Epidiolex.

CBD has no psychoactive properties. It does not create a “high” when consumed.

It is possible to extract CBD in a pure form from Cannabis plants. It is often manufactured into tinctures, salves, pills, oil and other forms.

There are also some varietals of Cannabis plant that have high concentrations of CBD. Typically, high CBD in a plant means that it has a low THC concentration. When consumed, these varietals have lessened psychoactive effects.

CBD has no lethal dose or medical side effects.

Cannabigerol is more commonly known as CBG. It is a minor cannabinoid in plants of the Cannabis genus.

It usually accounts for no more than 1% of cannabinoids found in Cannabis plants.

CBG has no psychoactive effects, meaning that it does not produce the “high” associated with THC.

CBG is the parent chemical to THC, CBD, and CBC. Cannabis plants naturally produce CBG. Due to complicated chemical interactions in the plant, CBG breaks down to produce either THC, CBD, or CBC.

Concentrate refers to any form of hash, kief, or hash oil.

Dabbing is a method for consuming Cannabis concentrates.

Generally speaking, the process involved placing a “dab”, or small amount, of Cannabis concentrate onto a heated surface. The “dab” is immediately vaporized and inhaled by the user.

Dabbing is a more advanced and potent form of consumption than smoking or vaping.

A dispensary is a store that is legally authorized to sell Cannabis products and Cannabis paraphernalia.

Dispensaries are manned by budtenders, who can help you pick your products and make your purchase.

Consuming an edible is one form of marijuana consumption.  Edibles are food and drink products infused with marijuana.

The effects of THC are different when consuming an edible versus smoking or vaporizing the marijuana. It is the difference of the respiratory system versus the digestive system.

The term endo comes from a misspelling of “indo”, or indoors.

This term describes marijuana that is grown indoors, hydroponically.

Growing indoor allows you more control of the environment than growing outside.

Hash or hashish is a powder form of marijuana.

Hash is produced by gathering trichomes through a dry sieve or a water extraction method. The end product is a dry powder. Hash oil is a similar product that uses a solvent-based chemical process.

Hash is potent as trichomes contain high concentrations of THC and CBD.

Hemp is an industrial product used to create fabrics, ropes and other textile products.

Hemp is grown from Cannabis sativa, the same plant as marijuana. Hemp plants legally have to contain less than 0.3% THC.

Although hemp was illegal in the United States for the past eighty years, President Trump signed the new Farm Bill into law in 2018, making hemp federally legal.

When purchasing marijuana product, you'll have the option of indica, sativa, or a blend.

This blend is a hybrid between the two species of Cannabis: Cannabis sativa and Cannabis indica.

Hybrids are created through crossbreeding to achieve desired traits of both sativa and indica in a new ratio.

Indica is short for Cannabis indica. It is a species of Cannabis plant.

When compared, side-by-side, to a sativa plant, indica plants are shorter, squatter and produce more flowers.

Due to the legal status of marijuana, research into these claims has not been extensive.

A joint is a hand-rolled cigarette used to smoke marijuana.

Marijuana is a broad term used to talk about the plants and plant-products that come from the Cannabis genus.

Marijuana has many slang synonyms including pot, weed, mary jane, ganja and many more.

Although there is not hard rule, marijuana is a term typically used to talk about the drug aspects of Cannabis plants. It is not common for someone to discuss CBD used for medical purposes as marijuana.

There are 84 total cannabinoids in marijuana.

Typically THC is the cannabinoid that defines the drug-related aspects of marijuana as it is associated with a psychological and physical “high”.

Marijuana is federally illegal in the United States. Some forms of marijuana, such as marijuana prescribed by a doctor to treat a medical condition, are legal. State-by-state, marijuana is legal for recreational purposes.

Medical marijuana, sometimes abbreviated as MMJ, is a term for the use of Cannabis products to treat chronic pain, nausea, anxiety, sleep apnea and more.

The medical marijuana industry is highly regulated. Products must meet a certain medical grade before they can be sold to a consumer.

If you hold an MMJ card, you will pay a different sales and retail tax rate than if you were to buy recreational marijuana from a dispensary. There are also different laws dictating quantity that is legal to possess or purchase at a given time.

Pot is an informal, or slang, term for marijuana.

Recreational marijuana is not used to treat a chronic illness or condition. It is used recreationally, as the name implies, to achieve altered consciousness.

The sales and retail tax on recreational marijuana is higher than the tax imposed on MMJ.

There are limits on the amount of recreational marijuana that a person can purchase and possess.

Some dispensaries are med dispensaries only. Look for a sign in the window that says med/rec in order to find a dispensary that retails recreational marijuana products.

Sativa is short for Cannabis sativa. It is a species of Cannabis plant that is recognized by its height, loose branching and narrow leaves.

Strains of marijuana produced from the sativa species are thought to produce an energetic “high”. Increased creativity and reduced depression are reported side effects of a sativa plant.

Some users report that a sativa can increase anxiety, such as an increase in racing thoughts and paranoia.

A strain is a variety. Think of it like apples. Red Delicious apples and Macintosh apples both come from the same species of apple tree. But they are different varieties.

Strain is synonymous with variety or subspecies.

Strains are bred to achieve a pronouncement of a certain trait. For example, a strain may be grown for their color, smell, taste, or physical effects on the user.

Tetrahydrocannabinol, more commonly known as THC is the most recognized cannabinoid in marijuana. It is the active ingredient.

THC was first discovered and isolated in 1964.  THC is responsible for the psychoactive effects that marijuana has on users.

These effects include the feeling of a “high”. THC is often attributed with an increase in creativity, an increased appetite, and a decrease in depression.

Trichomes are crystalized glands on a Cannabis plant that produce resin.

The trichomes are a specialized part of the flower that carries the majority of cannabinoids. Magnified, thrichomes look like miniature mushrooms.

Trichomes are processed into hash or hashish.

Trimming is part of maintaining a healthy Cannabis plant. Trimming is removing the excess leaves from the flowering portion of the plant.

Trimming is performed after the buds have been harvested.

Vaping is a means of consuming marijuana products. Unlike a pipe or joint which burns the product to release the cannadinoids, vaping uses a vaporizer or vape pen.

A vaporizer heats the bud or oil to a specific temperature. Once the product is hot, the cannabinoids become vaporized and can then be inhaled.

It is argued that vaping is healthier than smoking because you are not inhaling the smoke by-products such as ash and other burned organic material.

Although vaporizing produces no smoke or odor, it can produce as potent of a high as smoking. Users should exercise caution when vaping because it is difficult to tell how much you have consumed.

Weed is another common slang term for marijuana. It is used a little more specifically than marijuana to refer specifically to the flowering portion of the Cannabis plant.

Now You Know the Difference Between Cannabis and Marijuana

And the colloquial use of slang terms adds in a whole new level of confusion.

But, with the use of our helpful glossary, hopefully your head has stopped spinning.

At least now you know whether people are talking about rope or medicine.

Looking for more information on the differences between cannabis and marijuana? Or just want to stay up-to-date on the latest news?