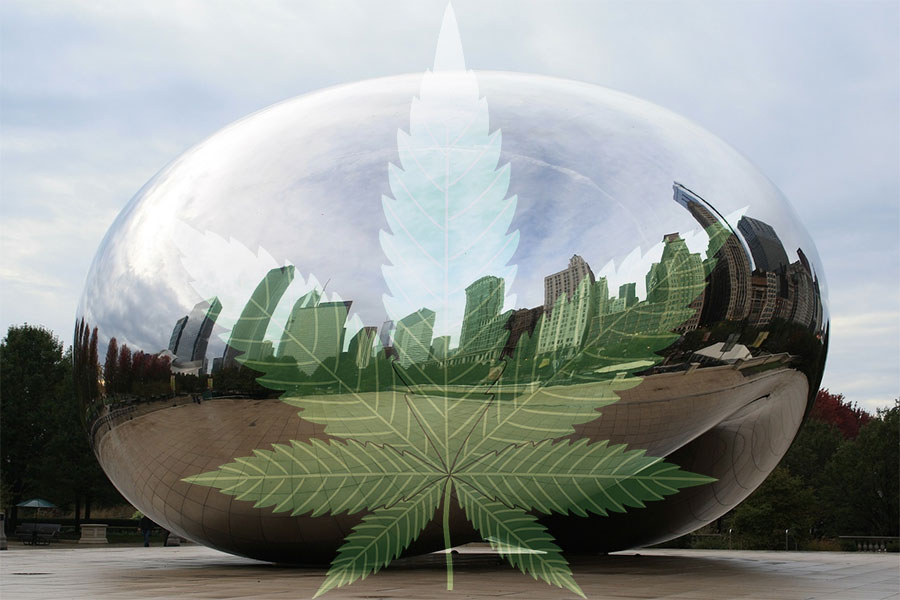 Illinois' monumental milestone of becoming the 11th US State to legalize cannabis recorded an impressive start to its 2020 recreational marijuana sales as residents celebrate the successful opening despite the high tax rates.

Recreational marijuana laws are being adopted throughout the United States, and Illinois recently became yet another one of the states to allow cannabis for all adults. On January 2, 2020, the dispensaries opened their doors to non-medical users and the results were astounding.

With this first day of sales alone, officials say that over 77,000 transactions took place, resulting in $3.17 million spent by local consumers, according to Governor JB Prtizker's senior adviser Toi Hutchinson. That's quite a feat and great first-day of legal recreational cannabis sales and was on par with Oregon's opening day numbers of $3.2 million as well. The administration team of Pritzker made an official statement on the success of the inaugural day of adult-use marijuana sales, calling it a ‘monumental milestone':

“As we start a new decade, Illinois has achieved a monumental milestone – launching the legalization of cannabis in a way that includes communities left behind for far too long, creates good jobs and expunges thousands of records for those who have lost out on opportunities and ends prohibition,” […]”Today is a historic new day, and as we move forward with growing this industry, I thank all those who worked hard to make the launch a success and will continue to dedicate themselves to expanding opportunities and righting the wrongs of the past.”

Thousands of sales took place with Cresco Labs, leading many people to get in line as early as 8:00pm on New Year’s Eve. The Sunnyside dispensaries ended up opening at 6:00 am the following day, as Jaqueline Ryan of Forest Park became the first person to make a legal recreational marijuana purchase, followed by brother and sister Aaron and Elise Swopes (respectively), who are both part of the local incubator program by Cresco in Chicago. The cannabis control senior adviser went on to say:

“The amazing thing about that is that there's a significant portion of these dollars that go directly into this community reinvestment fund, so we can continue to rebuild communities that have been hardest hit by the war on drugs,” […] “So sales are great but let's never lose sight on the impact that we're having on families around this state.” […] “This is one of those moments where we recognize that the significance of yesterday was that it was the end of prohibition and the beginning of how we hope to grow a new industry here in Illinois and then teach other states how to do it.”

Interestingly, the next person to make a purchase was Illinois Lt. Governor, Juliana Stratton, who has notably been against the legalization of cannabis in this state. Considering the decision to purchase, it looks like this stance may be changed.

For too long, IL residents, particularly those that are black & brown, have been targeted and criminalized for #cannabis possession.

“Our Restore, Reinvest and Review program will direct 25 percent of the state’s cannabis revenue right back into the communities hit the hardest by decades of over-policing, disinvestment, disenfranchisement and violence,” […] “In that effort we’re lifting up the voices of the people who actually live in these neighborhoods, who know these blocks and exactly where our dollars will make a real difference.”

Thursday wasn’t just a big day for sales – it also marked the last day for locals to submit an application for one of the coveted dispensary licenses in the area, which is presently limited to 75. The deadline for the applications was 4:00pm local time. Applicants piled in to busses to get down to submit their applications, as State Senator Toi Hutchinson pointed out. Hutchinson added that much of the funds from the sales will be helping to “rebuild communities that have been hardest hit by the war on drugs,” reminding the public to “never lose sight on the impact that we’re having on families around this state,” according to reports from CNN.

Charlie Bachtell, the CEO and founder of Cresco Labs, believes that these last few days are just the beginning of something bigger. After all, Illinois is the home to 13 million residents, and it welcomes 100 million tourists on an annual basis, which leads Bachtell to believe that the state could easily become the state with the highest level of adult-use cannabis in the country.

“We’re ecstatic for our Sunnyside dispensaries to begin serving recreational customers on such a historic day that launches a new era of cannabis and the development of an industry that will bring greater justice, social equity and business ownership opportunities throughout the state. Cresco is uniquely positioned in the supply-constrained state, with permission for the largest cultivation footprint at 630,000 square feet and ten retail dispensaries, including three in high-traffic areas in the city of Chicago.”

Joe Caltabiano, the Cresco Labs co-founder and president, believes that the concept of Sunnyside will help with managing the traffic of new customers, even if the few days come with long lines. He noted that the company “is already the leader in Illinois,” and he expects this position to last as the recreational market finds its footing.

“This is particularly impressive when you consider the long waits, supply shortages and sky-high pricing of products available at the limited number of dispensaries open.” […] “We have seen prices as high as $20 for a joint (compared with $8-$14 in most mature markets), vape cartridges for $70 and the most egregious being an 1/8 ounce being sold for $80 (compared to $35 in most mature markets or on the street).”

There was one minor setback trending about the legalized Illinois recreational cannabis sales, and that was state taxes:

Umm $30 for less then a half of gram. Nope!!! I’ll continue to support my local weed 🍃man. #Illinoismarijuana pic.twitter.com/2m5vsclMFt

There are many examples trending on social media platforms highlighting the high recreational cannabis tax rate:

According to our research, Illinois has put a 20% tax rate on all cannabis-infused products, but if the products are under 35% THC it is taxed at 10% where anything over that is taxed at 25%. Approved medical marijuana patients are taxed at 1% only.

With the new 2020 recreational marijuana laws, people living within Illinois can now possess up to 30 grams legally (roughly an ounce of cannabis flower), 5 grams of cannabis concentrate and 500 milligrams of THC edibles and tinctures.

As exciting as these developments are, another deadline is quickly approaching. Craft grow, infuser, and transportation license applications will be available no later than January 7th.

For residents of the 11th state to legalize marijuana (the first ten US States being Alaska, California, Colorado, Maine, Massachusetts, Michigan, Nevada, Oregon, Vermont and Washington), more information is available here about the Illinois Adult Use Cannabis Program that is expected to generate over $250 million in sales in the next two years.