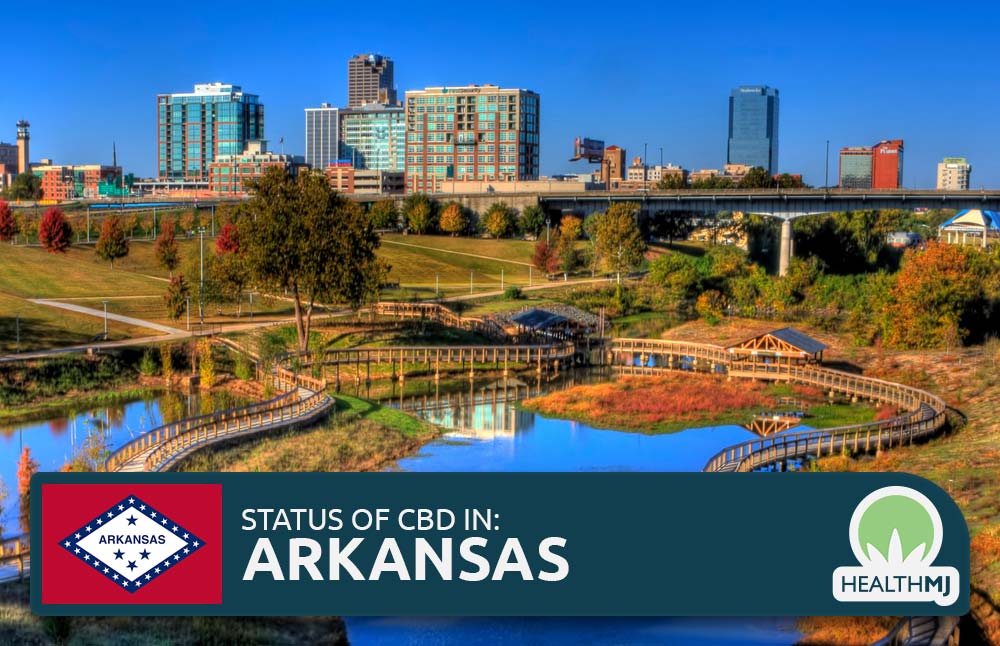 Take a look at the 2019 CBD state laws for Arkansas and how the hemp-derived cannabidiol infused products are regulated in AK, US

The 2018 Farm Bill has permitted states to create their own laws and regulations concerning CBD and medical marijuana. Each state that has legalized hemp has its own regulatory body that oversees the procedures and processes for growth, cultivation, and use of the substance within state borders.

Because the state of the law is constantly changing, it can be difficult to keep track. Having an overview of a state’s regulations can provide users with insight into how a state treats the substance. Those who live in Arkansas will find that there are several laws worth looking at that could provide some direction and insight.

Here is are the guiding laws in Arkansas – and keep in mind that it may not be an exclusive list, thus users should do their own research:

Arkansas has an industrial hemp research program, which is conducted by the Arkansas Agriculture Department’s State Plant Board. The Arkansas Department of Agriculture website provides details about the program.

According to the website, the Arkansas Plant Board is conducted by the Industrial Hemp Research Pilot Program, which is authorized by 7 USC Section 5940, also known as the 2014 Farm Bill. The state’s legislature passed Arkansas’ Industrial Hemp Act and it went into effect on August 2017. The legislation authorized the state’s Plant Board to adopt regulations for and to administer the state’s industrial hemp research program. According to the website, the program has many potential uses that can create an economic impact and research projects, which can identify the uses that hemp can have.

Under the state’s regulations, industrial hemp is defined, in part, as all parts and varieties of the Cannabis sativa L. plant, and any part of such plant cultivated or possessed by a grower that has been licensed. The substance has less than 0.3% THC on a dry weight basis. The regulations identify that the definition of industrial hemp has the same meaning as federal regulations.

The department identifies that there are many potential uses for Industrial Hemp and that the state is seeking to determine the potential uses for hemp that would be a good fit for the state. It also indicates that the substance has three main components that can be harvested, which include the grain, fiber, and material and that each component is grown with a different agricultural model and is harvested with certain methods.

Issue Six, also known as the Arkansas Medical Marijuana Amendment, was featured on November 8, 2016, ballot and initiated as a constitutional amendment. The state-approved the amendment. Those who voted “yes” to the amendment did so to “legalizing medical marijuana for 17 qualifying conditions, creating a Medical Marijuana Commission, and allocating tax revenue to technical institutes, vocational schools, workforce training, and the General Fund.” On the other hand, those who voted “no” did so in opposition to the stated amendment.

After the passage of Issue 6, the state’s Department of Health days after the effective date of Issue Six, November 9, 2016, 120 days to adopt rules concerning the amendment’s provisions. Further, House Bill 1026 extended some of the provisions from 120 days to 180 days. A few of the adopted rules concerned:

The Commission has come under fire though. Recently, a lawsuit by Naturalis Health was filed against it, alleging that its procedure for cultivation license awards was flawed due to conflicts of interest and bias. Judge Wendell Griffen oversaw the lawsuit and held that the award processing by the state for cultivation licenses was unconstitutional. The Arkansas Supreme Court then reversed the ruling, stating that the trial court did not have jurisdiction to cease the Commission’s licensing procedures. Currently, over 5,000 medical marijuana licenses have been issued by the state.

Research Proposals by Potential Processors and Growers of Industrial Hemp

According to the Department’s website, potential growers and processors of industrial hemp must submit research proposals. The Plant Board Industrial Hemp staff will evaluate the proposal and determine if it will advance research project goals concerning hemp production in the state. The website also identifies the many possible research topics, including but not limited to, pest management strategies, planting methods, best management practices in crop production, development of hemp fiber products, development of hemp seed products, and the like. Concerning pesticides, there are none that have been specifically labeled for hemp crop use in the state.

House Bill 1400 requires that medical marijuana products have warning labels. The warning labels must communicate “the health and safety risks associated with smoking and a list of places and conditions in which smoking marijuana for medical use is illegal in the State of Arkansas.”

Further, the bill bans people from smoking marijuana in a number of locations, such as where smoking tobacco is illegal, in the presence of anyone under 14 years of age, inside a vehicle, aircraft, watercraft, or a vehicle that is drawn by the power of muscle, and in the presence of a pregnant woman or where doing so would influence someone not permitted to smoke.

The Arkansas Department of Health and Medical Marijuana

The Arkansas Department of Health has a page dedicated to medical marijuana. The page features sections for new patients, caregivers, physicians, forms, and FAQs. On one of the pages, users will find the requirements necessary for applying for a marijuana ID card. Here are the requirements, as they can be found on the page:

Upon applying and being approved, the user’s ID will be valid for one year from the date of issuance or the amount of time designated by the physician.

There is also a list of qualifying conditions. A few of the listed conditions as they appear on the link to the page above are:

Further, not every physician may certify one for medical marijuana. According to the link to the page listed above, the “medical provider must be a doctor of medicine or osteopathy licensed in the state of Arkansas, have a controlled substances license on file with the DEA, be in good standing to practice medicine in Arkansas, and have a bona fide physician-patient relationship with the patient they are certifying for medical cannabis.” Further, the Department does not have a physician list, rather patients must locate their own physician.

There are penalties for those who do not have a legal permit issued by the Arkansas Department of Health to use medical marijuana. This page expresses the laws and penalties.

Overall, there is a great deal going on concerning medical marijuana and use within states. Those who stay aware of their state’s laws may be in the best position. States have the power to make their own laws and regulations, even in light of federal law. Keep in mind that regulations are always subject to develop and change. As a result, users may want to stay abreast of any changes by checking the regulations on a regular basis.

0
Reviewing the Top 10 Best CBD Energy Drinks in 2020 CBD beverages have skyrocketed in popularity. There are many different ways to ingest CBD, and...
Read more

0
© 2014-2020 HealthMJ - The cannabis news, guides and updates here are for educational and informational purposes only. Nothing should be interpreted as legal or wellness advice. Consult with a licensed healthcare practitioner before using any medical marijuana product. The content found on this organic grassroots health project has not been FDA approved or evaluated.