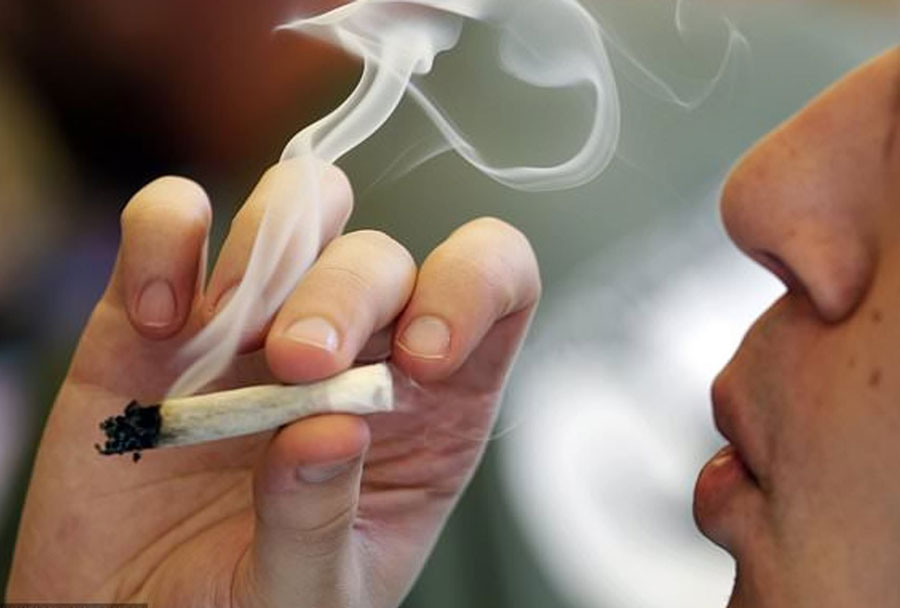 Nate Diaz, one of the most popular UFC and MMA fighters in the world, who also owns a CBD company and avid user of cannabidiol himself, tests positive for steroids ahead of his UFC 244 match with Jorge Masvidal

Throughout Nate Diaz’s career in MMA, he has been a known marijuana user for the last few years, even boldly lighting a CBD cigarette while on stage at an August event. Considering his public use, many fans weren’t surprised to find that he had tested positive on a drug test by the United States Doping Anti-Doping Agency. However, he didn’t test positive for cannabis. Instead, before the UFC 244 fight with Jorge Masvidal, he tested positive for LGD-4033, a banned muscle-growth stimulant that contaminated his plant-based multivitamin.

Open workout or open smokeout? @NateDiaz209 just lit up a blunt on stage ahead of #UFC241 pic.twitter.com/5DJeUzL0Pj

The muscle growth supplement is primarily used to help with muscle strength and to regain the losses that are commonly associated with aging. At this point, the substance isn’t approved by the FDA for clinical use by humans but USADA admits that there are already dietary supplements being found with spiked doses of the stimulant. Unfortunately, these doses aren’t mentioned anywhere on the label.

All fighters in the UFC must adhere to the anti-doping agency’s policies, but the failed drug test is such a unique circumstance. Athletes are able to check their medications and supplements against a database provided by the USADA’s website. The top five searches on the website are:

Diaz, who owns a CBD brand by the name of Game Up Nutrition, posted to Twitter to discuss the recent testing concerns, stating that he will be unable to make it to the fight as a result of the “elevated levels” in his test, which he highly disagreed with. Adhering to a generally healthy lifestyle, including his vegan dietary regimen, he is presently refusing to compete in the UFC until someone “fixes” this issue.

Your all on steroids not me pic.twitter.com/ykrZmRIoPS

As stated above, Nate Diaz had many choice words in his arsenal regarding the matter:

“This is warfare. They were telling me ‘I’m on drugs.’ I told them, ‘No I’m not, fix your test,’ ” […] “I continued taking my Whole Foods supplements, and I only eat out of the garden. I live by the code. Only the strong survive. I don’t need [performance enhancing drugs]. They messed up everything and what I believe in. It made me lose sleep at night, and it wasn’t fair. You ain’t ruining my whole legacy. I’m all natural. If we was cavemen, I’d be the hardest caveman out there.”

The policies are incredibly complicated and difficult to filter through. The policy states that the drug policy cannot be violated while the user is in-competition, which is the 12 hours preceding the competition until it ends. This time includes sample collection, though each event organizer has the power to define this phrase differently.

Even if someone ultimately ends up using a prohibited substance due to a medical condition, a Therapeutic Use Exemption can be filed. Still, this process is also a little tricky. There are some states that make the process of getting a prescription relatively easy (like Colorado), but there are also states where even the possession of any marijuana is reason enough for the authorities to put the user behind bars. Also, federally, the substance is still classified as Schedule I, which means that any state without medical or recreational laws can charge the individual.

The problem with marijuana specifically is that it can remain in the body for weeks and can become active with more exercise – a common activity for a UFC fighter. Cannabidiol (CBD), unlike the THC in marijuana, doesn’t have the intoxicating effect, which is why is labeled “conditional.” Its use is federally legal with the 2018 Farm Bill, but there are a few states that have created laws that make its possession a crime.

UFC owner and matchmaker Dana White, who has been booking Diaz's UFC fights since 2007, even commented on the matter regarding Diaz:

“Nate has this thing that people love about him. [He’s like] ‘I’m not doing what the man tells me to do,’” […] But he never actually really does it in a disrespectful way, or actually says it. Every time I see him, Nate’s one of the nicest guys you’ll ever meet.”

Even though the USADA attempts to clarify their policy on CBD, they fall somewhat short, offering a very confusing statement:

“Cannabidiol (CBD) is no longer prohibited. However, CBD products extracted from cannabis plants contain varying concentrations of THC, which remains a prohibited substance and could cause a positive anti-doping test. As such, the use of any CBD product is at the athlete’s own risk.”

Still, the test was positive for a steroid, and not CBD. Realistically, there are reports that the FDA will end up approving this substance anyway, which is enough cause for anyone to be frustrated. Hopefully, the policies will catch up to the research on these substances, rather than wasting the career of a solid fighter.

Diaz had this to say about the UFC:

“You know, I shouldn’t be getting into the details, but every time after a fight, relationships change with the whole company” […] “I made all this happen. So the title is already mine. And I’m not trying to bust nobody out, but I feel like they need some type of leverage over me to keep me from being the … king of the whole … , you know what I’m saying? They have been the whole time. They live on me.”

For those interested, Nate Diaz's Game Up Nutrition CBD company offers a variety of hemp-derived cannabidiol-infused plant-based products such as:

In closing, here is some promotional artwork regarding UFC 244, Diaz vs Masvidal which is slated to happen on November 2, 2019, as the two competitors will fight regardless of the steroid testing positive issue for what is being hailed as ‘the baddest mofo on the planet'.

November 2, at #UFC244 we will find out who is the true Bad Mofo King. @gamebredfighter vs @natediaz209 for the official Bad Mofo Title belt. There’s Not a fight fan alive that isn’t pumped for this one. #305 vs #209 #MasvidalvsDiaz #americantopteam Respect to @dosbrak for this masterpiece